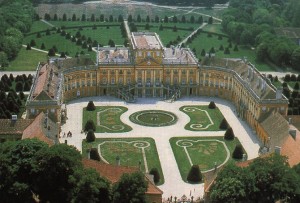 Fertöd is a Hungarian city located within the region of Western Transdanubia, in the Province of Gyor Moson Sopron, near the border with Austria. This city offers several interesting attractions, although it is renown by its Esterházy Castle, one of the most interesting constructions tourists could meet during a vacation in Hungary. The Eszterházy Castle is famous in not only Fertöd but all Hungary due to the fact that it is the most important Rococo construction or monument in the country.

This castle is also known as the Hungarian Versailles and was constructed by request of Miklos Eszterházy, also called Miklos the Magnificent.

The Palace of Eszterházy has more than 125 rooms and is an icon of Hungary. It was built in the 18th century and in no more than 3 years, approximately between 1763 and 1766. Miklos Eszterhazy, one of the most famous Hungarian aristocrats of that epoque, hired some of the best architects of Europe for its design, and soon after its completion, it became known as one of the most luxurious constructions of Hungary.

One of the most famous rooms of the Castle of Eszterházy is its library. It is large enough as to have space for keeping about 22000 books, and has, therefore, one of the most important collections of books visitors could find“. But in comparison to that there is another castle, indeed a true Palace in Austria not far away from the castle in Hungary: the Esterházy Palace in Eisenstadt, in the Burgenland,almost at the borde to Hungary. It was the main residence of the Esterházy family and in the middlle of the 19th century, former Prince Paul Anton Esterházy took over one of the greatest private librarys of the whole Habsburg Empire when he took over the inheritance in 1833. This library contained about 72000 volumes. When you take part in a guided tour you can see a part of this library.
Information & Booking: +43-2682-719-3000
www.schloss-esterhazy.at
E-mail: management@schloss-esterhazy.at

Great post! Just wanted to let you know you have a new subscriber- me!